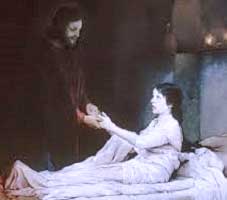 Itʼs obvious God wants us to have physical bodies that can fly back and forth from a “new earth” to heaven and back again. After all, we are going to be raised physically and “meet Jesus in the air.” AND we are going to live on a “new earth”—as Paul and Revelation state. So, there will be at least a little flying and landing with our new resurrection bodies.

But I have trouble with whether we will be able to conceive babies on the “new earth,” because if we live forever it will get crowded. Look at the earth now, with death. Now imagine a deathless population eternally begetting babies.

Also, if babies are born on a “new earth” they will have an unfair advantage over the those born on a fallen earth who risked eternal damnation, because on the “new earth” there probably wonʼt be any chance of THAT happening.

So letʼs say “no” to babies on the new earth.

But if we have physical bodies with genitalia that canʼt conceive, can we still have sexual intercourse? On a “new earth” that would be without risk of conception or disease. Sounds like a Penthouse editorʼs wet dream. Sex without consequences. Of course if itʼs just sex with one other person for eternity, might be boring, but what about people who were married more than once on earth and divorced each time, or who never married at all? Can those folks date other folks on the “new earth” and have sex on their first date?

If parts of the Bible are right, God isnʼt that big a fan of sexual intercourse, aside from it being needed to fill the earth. But the earth is overfilled now, and we still canʼt stop rutting long enough to get this “food, air, garbage” thing worked out. So I imagine the urge to have sex with other perfectly healthy physical bodies on a new earth will be just as great if not greater than the urge today.

So hereʼs the options, weʼll either be having sex without risk of pregnancy or disease, or weʼll be conceiving perfectly saved babies that will live eternally with us in infinitely extended families on an infinitely expanding earth. OR… God will delete all sexual urges such that our physically resurrected bodies with their genitalia (with its extra-sensitive nerve endings packed tightly together), and all those baby-making parts, will simply be hanging there “for show” for eternity. Funny. Very Funny, God.