Stories in which Jesus commands the dead to come back to life, grow less secretive, more public, more impressive, and play a more important role in the story when you read them starting with earlier Gospels and ending with the fourth Gospel. 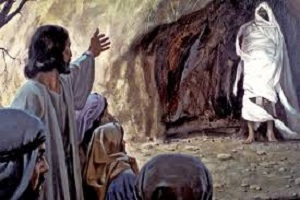 One canʼt help but notice a trajectory in stories about Jesus commanding the dead to come back to life, from Mark to Matthew, Luke and John. The stories grow less secretive, more public, more impressive and play a more important role in the story when you read them starting with earlier Gospels and ending with the fourth Gospel. Starting with Mark…

…one of the synagogue leaders, named Jairus, came, and… pleaded earnestly with him, “My little daughter is dying. Please come and put your hands on her so that she will be healed and live.” So Jesus went with him… some people came from the house of Jairus, the synagogue leader. “Your daughter is dead,” they said. “Why bother the teacher anymore?” Overhearing what they said, Jesus told him, “Donʼt be afraid; just believe.” He did not let anyone follow him except Peter, James and John the brother of James. When they came to the home of the synagogue leader, Jesus saw a commotion, with people crying and wailing loudly. He went in and said to them, “Why all this commotion and wailing? The child is not dead but asleep.” But they laughed at him. After he put them all out, he took the childʼs father and mother and the disciples who were with him, and went in where the child was. He took her by the hand and said to her, “Talitha koum!” (which means “Little girl, I say to you, get up!”). Immediately the girl stood up and began to walk around (she was twelve years old). At this they were completely astonished. He gave strict orders not to let anyone know about this.

Mark has the girl be near death when Jesus is asked to come see her, and the resurrection takes place only in front of a few people inside the personʼs home, and Jesus says to tell no one about what he did.

Matthew tells the same tale, but has the girl already dead when Jesus is asked to come see her, she is no longer merely “near death.” As in Mark the resurrection takes place inside the home in front of only a few people, but Matthew nixes the command to keep it a secret what he Jesus has done instead adds, “News of this spread through all that region” [presumably, Galilee]. (Speaking of resurrection stories, Matthew also adds a brief note about the “raising of many saints” at Jesusʼ death, but itʼs not a resurrection story in which Jesus commands the dead to live but an apocalyptic add-on to make Jesusʼ death more impressive. Still, it is an additional resurrection miracle compared with the Markan story.)

Luke follows the Markan story of the raising of the daughter including the command to keep it a secret. But Luke adds a second resurrection story to his Gospel, more spectacular than the resurrection tale found in the earlier two Gospels, since in this case the child is not still at home lying in bed but it is being carried on the way to burial, and the miracle takes place in full public view, and not merely in far off Galilee but in Judea, and, “The news spread throughout Judea and the surrounding country.” Interestingly it is a widowʼs son who is dead in this case, and this Gospel as well as Acts is also known for its focus on “widows” much moreso than earlier Gospels:

Soon afterward, Jesus went to a town called Nain, and his disciples and a large crowd went along with him. As he approached the town gate, a dead person was being carried out—the only son of his mother, and she was a widow. And a large crowd from the town was with her. When the Lord saw her, his heart went out to her and he said, “Donʼt cry.” Then he went up and touched the bier they were carrying him on, and the bearers stood still. He said, “Young man, I say to you, get up!” The dead man sat up and began to talk, and Jesus gave him back to his mother. They were all filled with awe and praised God. “A great prophet has appeared among us,” they said. “God has come to help his people.” This news about Jesus spread throughout Judea and the surrounding country.

The fourth Gospel features the most spectacular resurrection tale of all, that of a man who is already dead, and has already been carried to his tomb, and remains dead for four days and “stinks,” and this takes place in Judea rather than far off Galilee, and the news of this resurrection miracle is portrayed as the REASON why the Pharisees sought to have Jesus crucified. I am speaking of the tale of the raising of Lazarus:

Hence, stories in which Jesus commands the dead to come back to life, grow less secretive, more public, more impressive, and play a more important role in the story when you read them starting with earlier Gospels and ending with the fourth Gospel.