Reply #2 to Casey Luskin of the Discovery Institute, Proponent of Intelligent Design

Caseyʼs response to my first reply appears in the two paragraphs below. He admits he never read my response here.

Thanks for the reply, Ed, but I stopped reading when I hit “I.D. has come no further.” Really? Last year ID published its 50th peer-reviewed scientific paper. Those papers show simulations of evolution require intelligence to produce new high complex and specified information (CSI), which doesnʼt arise by Darwinian processes. Some experimentally test biological systems and detect high CSI. ID is producing both empirical and theoretical research that backs its claims. Your curt denial of this progress doesnʼt negate it. For details, please see http://www.discovery.org/a/2640

Re your other comment: The fact that organisms die doesnʼt refute ID—We have TONS of experience with things that that wear out or stop working, but are designed. We detect ID by finding high CSI. You can have high CSI in an organism that dies. Youʼve put forth a straw man test of ID, and havenʼt addressed my initial rebuttal. For details, please see: http://www.evolutionnews.org/2012/02/undesirable_int056831.html

How many of those papers were published in the new I.D. journal, peer-reviewed by other I.D.ists? And to what degree were such papers devoid of other interpretations? Those who wish to pursue individual cases should plug the names of the I.D.ists writing the papers into the dedicated search engine at the top of my blog pages. Then they will discover links to responses from non-I.D.ists. (Neither has the YEC, Todd Wood been very impressed by I.D. papers, see Toddʼs Blog, nor the ex-I.D.ist Dennis Venema who has published detailed critiques of I.D.ist arguments at BIOLOGOS, a website run by Evangelical Christians and founded by a Christian and biologist who headed the Human Genome Project and where Christians who are scientists defend misunderstandings of evolution by creationists and I.D.ists.

Some I.D.ist research resembles creationist ploys such as calculating odds of a particular protein forming. But nature takes advantage of a range of options that neither evolutionists nor I.D.ists have the capacity to fully map or predict — for instance mosquitoes that developed resistance to DDT evolved multiple copies of the esterase genes that enabled them to detoxify it; while cotton budworms evolved a different method, an alternate target for the poison, and houseflies evolved yet another method, i.e., altered proteins that transported the poison away. So calculating the odds of a particular protein evolving are not the point of evolution which takes advantage of a broader range of possible changes that we have the ability to map or predict.

We also know for a fact that the genome is mutating, especially with each meiotic division of a germ cells, so mutations are continual, generation after generation.

And we also know that each living organism has to vault over countless hurdles until it reaches its own age of reproduction and begins passing along its new mutations. And the majority of organisms never get to pass along their mutations, or the majority pass them along to a lesser degree than some minority within their own species. How Many Organisms Donʼt Pass Go? (If what happens in nature was repeated by human designers we would not consider them highly competent at their jobs, especially if they were given omnipotent powers of creation.) See these examples:

A single bacterial cell that divides every twenty minutes will multiply to a mass four thousand times greater than the earthʼs in just two days. That doesnʼt happen because of the inconceivably huge death rate of bacteria. The vast majority of them donʼt pass all the hurdles of nature. (Bacteria also illustrate enormous evolutionary adaptability since they have the ability to harbor loads of mutations even surviving large doses of radiation, and they can share genetic material, and they have short reproductive cycles and hence can form enormous populations with loads of mutations in short periods of time (a boon of asexual reproduction since each individual organism can reproduce, no sex needed), Hence, We Find That Bacteria Have Adapted To The Most Extreme Environments, i.e., extreme-o-phile species of bacteria. Thatʼs exactly what we would expect of bacterial species if evolution were true. Including the fact that bacteria are so small such that countless numbers of them exist both inside and outside of our human bodies and those of all other species. In fact bacteria are so small that thereʼs more bacteria inside and outside a human body than there are human body cells.)

A sunfish sometimes lays three hundred million eggs. The vast majority of them donʼt pass all the hurdles of nature, a huge majority fail to survive to pass along their genes.

If all the eggs from one mother housefly lived, she would produce more than five trillion offspring in just one season.

A single oyster, left to its own devices, produces more than one-hundred-twenty-five million eggs in a season. Thatʼs more than enough oysters, if none died in eight years, [10 to the 89th power number of oysters] to crowd the water out of the oceans and make it cover the earth.

A female sea turtle lays a hundred or more eggs, but after they hatch in a nest buried beneath the sand on the beach only a handful of baby sea turtles make it to the safety of the ocean.

About one hundred million sperm cells are found in each cubic centimeter of human ejaculate. Yet only one sperm lives to fertilize the femaleʼs egg. The rest die. There are equally bountiful numbers from the world of seed-bearing plants.

And speaking not just about wasted sperm, but of egg cells that are fertilized [i.e., zygotes] the pro-lifer, Dr. John Collins Harvey, admits, “Products of conception [often] die at either the zygote, morula, or blastocyst stage. They never reach the implant stage but are discharged in the menstrual flow of the next period. It is estimated that [this] occurs in more than 50 percent of conceptions. In such occurrences, a woman may never even know that she has been pregnant.” 50 percent failure.

And a fairly high percentage (20-30% or more?) of people born as single individuals used to be twins in the womb but one of them was reabsorbed into the womb or into the other twin. (See “Vanishing Twin” syndrome.)

Even after being born, please note that two hundred years ago the French naturalist, Buffon, lamented, “Half the children born never reach the age of eight.” So half of all fertilized human egg cells fail, and half of all children born never reached the age of eight until the development of modern plumbing (for water safety) and modern medical science.

Casey, What do you honestly think about a factory filled with human designers whose designs functioned on such a feeble basis?

There is no firm line one can trace in the case of any so-called “design” of modern day species. Evolution looked at Big Picture wise does not resemble progress so much as fecundity and taking advantage of the widest array of possible situations. So what we see in nature fits evolution via mutation and natural selection at least as much as it fits the idea of a Designer (who has to constantly keep readjusting matters, entering and exiting the room constantly over the eons, invisibly tinkering about, and then leaving the room, and while tinkering with genes not removing genes for cancers and illnesses, not removing those). And for all such tinkering we see the failures of the majority of sperms and eggs, and newborns, and the extinction of countless cousin species and cousins of cousin species.

Letʼs get into planets as well. Talk about wasted real estate in our own solar system and probably in countless others, and our planet being in one spiral arm of but one galaxy out of a couple hundred billion galaxies with countless stars and probably countless planets too. If a human designer made that many empty planets what would one think? (The creationist ploy up till the early 1980s was to deny even the existence of other systems of planets throughout the cosmos.)

For more of my posts on I.D. please click on the “Intelligent Design” label.

A Historical Figure Worth Note 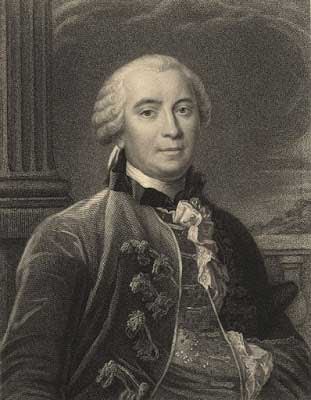 Georges-Louis Leclerc, Comte de Buffon
“It has been said that ‘Truly, Buffon was the father of all thought in natural history in the second half of the 18th century’.”
“…outlined a history of the Earth with little relation to the Biblical account, and proposed a theory of reproduction that ran counter to the prevailing theory of pre-existence. The early volumes were condemned by the Faculty of Theology at the Sorbonne. Buffon published a retraction, but he continued publishing the offending volumes without any change.”
Charles Darwin wrote in his preliminary historical sketch added to the third edition of On the Origin of Species: ‘Passing over… Buffon, with whose writings I am not familiar’. Then, from the fourth edition onwards, he amended this to say that ‘the first author who in modern times has treated it [evolution] in a scientific spirit was Buffon.’ But as his opinions fluctuated greatly at different periods, and as he does not enter on the causes or means of the transformation of species, I need not here enter on details”. Buffonʼs work on degeneration, however, was immensely influential on later scholars but was overshadowed by strong moral overtones.


According to Ernst Mayr:
“He was not an evolutionary biologist, yet he was the father of evolutionism. He was the first person to discuss a large number of evolutionary problems, problems that before Buffon had not been raised by anybody…. he brought them to the attention of the scientific world.”