Wolf Worms, the Bot Fly, and The Lord of the Flies?

Video of a Botfly being removed from a girls head: www.vexman.com Botfly Story

Ed Babinski writes: The Designer sure knows how to invent creatures to bite and tear or debilitate other creatures.

I guess the Designer got bored with designing flies that just laid their eggs on excrement or on a dead carcass or on decaying vegetable matter (Iʼm not sure about the last one, but the designer could probably invent flies who did just that). Instead he had to design flies whose maggots lived and bred in an annoying fashion in the flesh of squirrels.

The Screw worm fly of Africa has to find a wound in the flesh of a cow or human being and lays its eggs there (since itʼs tiny mouth canʼt bite through the skin of the animals it lays its eggs upon). The eggs hatch and the maggots develop biting parts that allow them to burrow deeper and gorge themselves on their host, be it cow or man. They often bore into the lungs or even the brain, and the cow or human being dies. Oh that Designer!

I asked my daughter [as a Christian] if she believed God “created” that awful parasite on the squirrel (she saw the gross photos)... those worm parasites cause the nasty sac they lay up in, to “drain fluid”. I nearly threw up looking at the photos. Anyway, I asked her if she believes God “designed” or “created” those parasites, and she answered me, “No.” I asked her, “Then how did they get there? Where did they come from?” She thought and answered, “I donʼt know.” I asked her then, “Do you think they could have evolved?” She thought and replied, “Probably.” 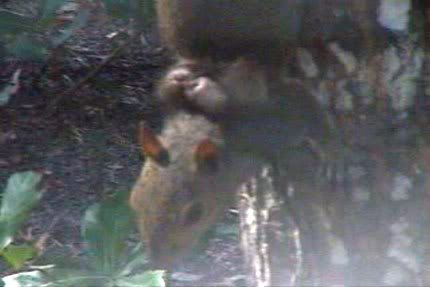 “I was both fascinated and disgusted by the stories about bot flies and related what I was reading to my girlfriend, Heather, who was also grossed out. We participate in an online music community called Songfight! and had decided to write a song for the upcoming fight (April 27 - May 4). After reading about bot flies, the title “A Very Unlikely Occurrence” seemed to hold the most promise and Heather decided to write lyrics about bot flies. And so, this song was born”:

Here are the lyrics in case you canʼt understand the words:

Weʼll dig into your scrota
To grow our metanota
Someday weʼll pop right out
And then youʼll know what that oozing bump was all about!

Anyway, I hope you enjoy it and maybe you can find some other bot fly enthusiasts with which to share it.
Cheers,
Damien Di Fede