Dear Dave, Please note that I did not head this article, “Flat Earth Teachings of the Bible,” but “Flat Earth Assumptions of Biblical Authors.” I agree that the question of “Whether the Bible TEACHES the world is flat” is separate from the question of “What the ancient Hebrew writers of the Bible may have thought about the shape of the cosmos.” One can accept all of the prima facia evidence that the ancient Hebrews believed and spoke in terms of a flat earth without necessarily having to believe that the Bible was written in order to “reveal to future mankind” the true shape of the earth. Therefore Evangelicals (like Seely and Walton, mentioned below) as well as Catholic biblical scholars can and will continue to employ the historical approach when it comes to discovering what the Hebrews mostly likely believed about the shape of the cosmos based on their writing in the Bible, and at the same time argue that the Bible might not have been written in order to provide accurate information as to the shape of the cosmos. So we probably agree there. 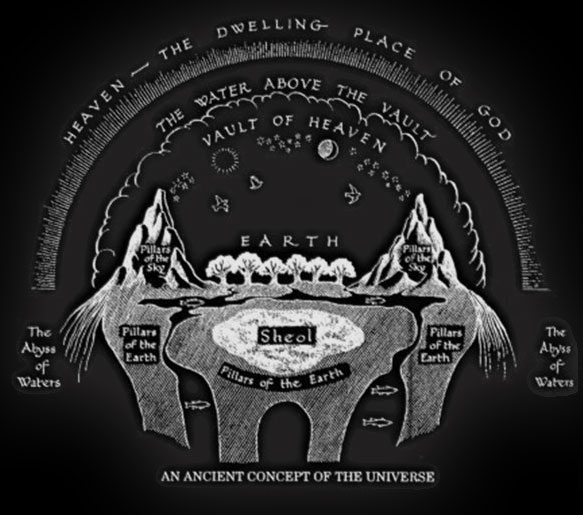 However, one point I wish to add to the above is that IF God allowed ancient naive flat-earth views of the cosmos (as well as views of a “six day creation” of the entire cosmos that revolved around “earth” evenings and morning) to exist in the minds of his ancient followers, what other ideas in the Bible might not also be the result of naiveté rather than truth?

What about the ancient view that animal sacrifices were necessary to appease god(s) for instance? Was that the result of naiveté or eternal truth? Or the idea that “the life was in the blood” instead of being primarily in the brain and nervous system? Might it not have been naiveté that inspired the ancient Hebrews to view the world in terms of “sympathetic magic,” as in the case of their belief that by laying their hands on a goat and then driving the goat into the wilderness, their sins would thus be carried away? (Lev. 16:20-22) Or was it naiveté that inspired the Hebrews to use the SAME word to describe both mildew stains on walls, and leprosy sores on the human body, and in both cases employ a bird to which the priest claimed to transfer such stains and sores, and then let the bird go into the sky to try and make both of those unwanted things likewise go away? (Lev. 14:4-7,48-53) What other beliefs and practices in the Bible might not also be based on naiveté rather than truth? That is my question.

For instance, the Bible has much to say about the all-directing heart of man, his life-blood, and his soul-breath, i.e., the pounding heart, the whistling breath, and the sharp color of blood, together with its lack being a sign of death, attracted the attention of the ancients. While the organ known as “the brain,” a silent unobtrusive organ, was overlooked (see here and here) and therefore not granted the meagerest mention or symbolic association in the Bible, unlike the heart, bowels and kidneys which are all granted symbolic “guiding” mentions. The brain was ignored even when animals were offered up to Yahweh who wanted their hearts, kidneys, bowels and blood, but not their brains. Yet today we know that it is the organ of “the brain” that is our chief directing organ and holds the “life” most precious to us, being the center of our conscious life. All of which goes to prove that the Bible is far from being an authoritative guide to science and/or the authors of the Bible dwelt more on appearances than on scientific facts.

Ancient Near Eastern accounts of creation depicted the heavens (usually curved) above a flat earth, as they appear to the naive eye even today. Even modern day observations by children produce similar results (The Harvard Smithsonian Center for Astrophysics conducted a study during the 1980s on the mental sophistication of children and discovered that almost one-half of children aged ten years and younger in the United States and other countries believe the earth is flat. And those who say it is round picture “round” as a giant pancake or a curved sky covering a flat ground. One in four thirteen-year olds also believes the earth is flat.) The blue appearance of the sky may have also prompted the ancients to think in terms of the color of vast waters, and thus be the basis for their belief that the cosmos arose out of primeval waters, and lay in the midst of those same waters with a firm firmament holding back “the waters above.” (And the apostolic fathers right up to Martin Luther believed that was the case, based on words from the Bible.)

Which brings me to your recent reply to a brief online article of mine on flat earth verses in the Bible. (Please note that my most recent and comprehensive paper on the topic, Evolving Interpretations of the Bibleʼs “Cosmological Teachings”—OR—Does the Bible “Teach Science?”)

Please note that our views that not THAT far apart since we both agree that the Bible does not appear to have been written to teach us about modern astronomy, cosmology, geology, or biology. In your case however, you appear to have gone so far as to try to argue (ala J. P. Holding) that the Biblical authors were supernaturally preserved from assuming a single erroneous thing regarding the SHAPE of the cosmos. (What about regarding itʼs CREATION too? Were the authors of the Bible also preserved from assuming or writing down even a single statement that might be erroneous concerning how creation happened? I donʼt suppose youʼre willing to agree with J. P. Holding in making a “six day creation” your fall back assumption, as he does, are you)?

In all kindness, and regardless of what you wrote concerning my views, much of what I wrote about the “flat earth assumptions” of the ancient Hebrews is far from being out of the ordinary in the world of biblical scholarship, so you cannot blame what I wrote on “atheism/agnosticism.” Mainstream scholars, orthodox Catholics, and even Protestant Evangelicals, would agree with what I wrote, and find J. P. Holdingʼs inventive explanations just as unconvincing as I do.

Also, here are some notes on the sources you employed in your attempted “refutation” of what is a mainstream theological view. You employed:

Mesopotamian Cosmic Geography by Wayne Horowitz (Eisenbrauns, 1998) “The strengths of this study are Horowitzʼs demonstrated familiarity with the available Sumerian and Assyrian texts relevant to the Mesopotamian perceptions of the physical structure of the universe and its constituent parts, and his meticulous and intelligent presentation of them in an attractive and accessible format. Indeed, it is a handsome book, of the high quality typical of Eisenbrauns. Advanced students and scholars whose interests lie in Mesopotamian cosmography and who wish to explore it further will find this work to be an indispensable resource.”—Marilyn M. Schaub, Duquesne University in The Catholic Biblical Quarterly (61, 1999)

Famed Presbyterian inerrantist, B. B. Warfield, whose defense of Scriptural inerrancy and inspiration was published in the Princeton Review (1881), and republished since then (B. B. Warfield and Hodge, A. A., Inspiration. Grand Rapids: Baker, 1979), continues to be highly regarded among conservative Protestants, yet he wrote that an inspired writer of the Bible could “share the ordinary opinions of his day in certain matters lying outside the scope of his teachings, as, for example, with reference to the form of the earth, or its relation to the sun; and, it is not inconceivable that the form of his language when incidentally adverting to such matters, might occasionally play into the hands of such a presumption.” [B. B. Warfield, “The Real Problem of Inspiration,” in The Inspiration and Authority of the Bible (Philadelphia, Presbyterian & Reformed, 1948) 166-67.]

Famed Baptist theologian, Augustus Strong, wrote, “Inspiration might leave the Scripture writers in possession of the scientific ideas of their time, while yet they were empowered correctly to declare both ethical and religious truth.” [Augustus H. Strong, Systematic Theology, vol. 1 (Philadelpha: Judson Press, c. 1907), 226.]

Dr. Conrad Hyers (retired Chair of Religion at Gustavus Adolphus College), The Meaning of Creation, and also an online article that deals with some of the topics raised in that book, “Genesis Knows Nothing of Scientific Creationism: Interpreting and Misinterpreting the Biblical Texts”

Dr. Stephen C. Meyers (Th.D. from Trinity Evangelical Seminary of Florida and co-founder of the Institute for Biblical and Scientific Studies) addresses how seriously the Bibleʼs ancient Near Eastern context must be taken when discussing its creation stories and cosmology. His thesis in grad school was titled, “A Biblical Cosmology.” See: “Genesis One” & “The Bible and Science, Do They Agree?”

Article by a Jewish scholar: “Biblical Views of Creation” by Frederick E. Greenspahn