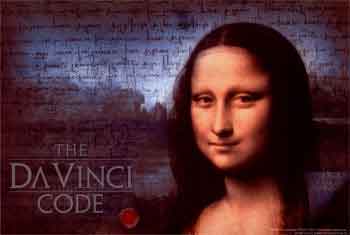 Dan Brownʼs novel proves that FICTION can be highly engrossing, and obtain a wide readership—especially if the fiction begins with a fictional promise of unveiling truth (*smile*), and especially if the market is ripe for it. The same might also be said of the Gospels and why they became “bestsellers.”

British actor Ian McKellen who appeared in The Da Vinci Code, put it this way: “Iʼve often thought the Bible should have a disclaimer in the front saying this is fiction. I mean, walking on water, it takes an act of faith.”

Quite a few people — including many fans of Dan Brownʼs book — will probably be displeased with such sentiments, but itʼs difficult to argue that significant amounts of the Bible arenʼt fiction. Obviously some portions are historical to one degree or another, but any more historical than the true parts of Dan Brownʼs novel? [Austin Cline at http://atheism.about.com]

The Gospels were like a first-century “Da Vinci Code” novel, featuring wild pesher and midrashic interpretations of “riddles and clues” that God allegedly added to the ancient Hebrew books of the Bible, written centuries before Jesus was born, yet which “foretold” his arrival and even incidents of his deeds, death and resurrection. The earliest Gospel, “Mark,” also speaks mysteriously about Jesus being secretive about his true identity. Sounds similar to the unconvincing arguments found in Dan Brownʼs mystery novel! Especially since the alleged “prophecies about Jesus” which were lifted (sometimes a mere half verse at a time) from the O.T. were based on the most tenuous of alleged connections, or even possibly based on making some stories of Jesus up just to suit the verses! [Google Jeff Lowderʼs online article, “The Fabulous Prophecies of the Messiah;” and also google “Fiddler Zvi” and his online “Messiah and Tanakh” page. Also note that the earliest Gospel, of which 90% was reproduced in the two later ones, Matthew and Luke, is also the gospel featuring the idea that Jesusʼs messiahship was originally kept a secret, which is a bit different from the last written Gospel were Jesusʼs messiahship is out in the open from the start beginning with Nathaniel in chapter one and with Jesus speaking solely about himself every chance he got in public, “I am” this, “I am that,” with not a word spent talking in parables to the public.

Another point raised by the Da Vinci Code is the haughtiness and self-seeking hierarchies of the Catholic church and her theologians, a point that even Christians throughout history have raised in ways that might make Dan Brown smile in recognition:

Take the words of the Catholic satirist, Erasmus, “As for the theologians, perhaps it would be better to pass them over in silence, not stirring up a hornetsʼ nest and not laying a finger on the stinkweed, since this race of men is incredibly arrogant and touchy. For they might rise up en masse and march in ranks against me with six hundred conclusions and force me to recant. And if I should refuse, they would immediately shout ‘heretic.’ For this is the thunderbolt they always keep ready at a moments notice to terrify anyone to whom they are not very favorably inclined” (Erasmus 57).

His commentary continues regarding the theologiansʼ ridiculous penchant for “endless and magisterial definitions, conclusions,” and “corollaries” (Erasmus 58).

“They [theologians] are so blessed by their self love as to be fully persuaded that they themselves dwell in the third heaven, looking down from high above on all other mortals as if they were earth-creeping vermin almost worthy of their pity…”

“Moreover, they explicate sacred mysteries just as arbitrarily as they please, explaining by what method the world was established and arranged, by what channels original sin is transmitted to Adamʼs posterity, by what means, by what proportion, in how short a period of time Christ was fully formed in the virginʼs womb… There are others which they think worthy of great and ‘illuminated’ [in the faith by the Holy Spirit] theologians, as they say. If they ever encounter these, they really perk up. Whether there is any instant in the generation of the divine persons? Whether there is more than one filial relationship in Christ? Whether the following proposition is possible: God the Father hates the Son. Whether God could have taken on the nature of a woman, of the devil, of an ass, of a cucumber, of a piece of flint? And then how the cucumber would have preached, performed miracles, and been nailed to the cross?…”

Dan Brown, in comparison with Erasmus, simply wondered whether Jesus could have had children and still “saved the world.”

Erasmus continued, “And then these most subtle subtleties are rendered even more subtle by the various ‘ways’ or types of scholastic theology, so that you could work your way out of a labyrinth sooner than out of the intricacies of the Realists, Nominalists, Thomists, Albertists, Occamists, Scotists—and I still havenʼt mentioned all the sects, but only the main ones.”

Erasmus does not spare the “religious” or the “monks” his berating wit either. Erasmus branded those who considered themselves “religious” or “monk” to be anything but that which such monikers signify. He, in fact, couldnʼt imagine “how anything could be more wretched than these men,” who were in reality “far removed from religion” and “encountered more frequently everywhere you go” (Erasmus 61).

Popes and priests are offered the same treatment. Popes are painted as the antithesis of the Christ example of poverty, labor, teaching, and sacrifice. It is the popes who have an abundance of luxuries, honor, and pomp. Popes have all of the advantages this life can afford. “How many advantages would these men be deprived of if they were ever assailed by wisdom” (Erasmus 66)? The priests, on the other hand, and when not fighting “for their right to [being given the] tithes [of parishioners], with sword, spears, and stone, with every imaginable sort of armed force,” are busy keeping a “sharp lookout to harvest their profits” (Erasmus 67-68).

So if Dan Brown satirized excesses within the Catholic Church, perhaps he was too light in doing so, especially when compared with what Erasmus (a reform-minded Catholic humanist) and Martin Luther (a former Catholic who became a Protestant Reformer) both wrote about it!

The Da Vinci Code, Fiction and The Gospels