I was photographing a squirrel yesterday. No particular reason, except that it was busy munching on a mushroom... got my camera. I wondered how squirrels are so much smarter than humans, to pick the edible mushrooms from the poison ones. I see them a lot in my front yard. However, yesterday as this particular squirrel turned around, I caught something on it, I never expected to.

Would like to know the cause, and if its infectious.

Deformed Squirrel? Mange? Disease?
Hi, I hope somebody can answer this question. Iʼve got a question about a squirrel I caught on camera yesterday. The closest thing I came to on Google was “notoedric mange”, and learned it can kill animals if they lose enough hair, but after looking at the photos, it doesnʼt seem to be what was ailing this particular squirrel.

This squirrel was bare across its shoulders of hair, and had what appeared to be some kind of growth(s) hanging from itʼs shoulder.

Iʼve never seen anything like this on any squirrels.
Iʼve uploaded images.
Can anyone shed some light on this? 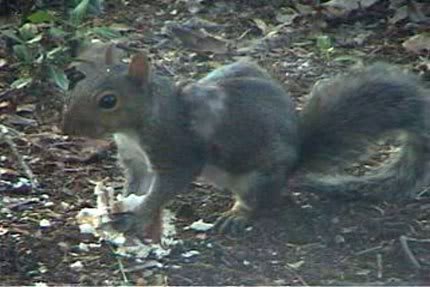 I would suspect that this is a larval infection from a nasty fly. In these parts (i.e., eastern Kentucky) we refer to these larval forms as a “Wolfworm”. I have seen this many times in skunks, rabbits, cats, and other small mammals in the area. Check out this web site for further info.

I hope this helps.