Creationists Love to Talk About “Living Fossils” Like the Coelacanth, Shark, Horseshoe Crab, etc. So Long As Evolutionists Aren't Allowed A Word in Edgewise.

Creation took six days. Evolution took billions of years. Hence it takes a bit longer to explain the Big History of the cosmos and planet earth than it does to read the creation story in Genesis chapter one. Likewise it takes a bit longer to discuss the evidence for evolution than it does to say, “God Did It.” Below is a typical “argument for creationism” that amounts to “Look a Living Fossil!” The “argument” is then followed by a discussion of the evidence for evolution. 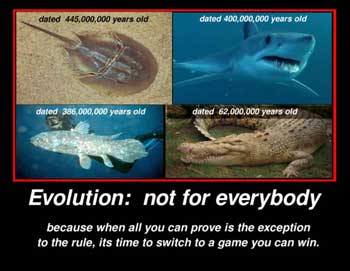 Iʼve mentioned before that I went to a fundamentalist Baptist high school. My first introduction to the Coelacanth was through a heavily biased (and flawed) biology textbook from Bob Jones University, which (to the best of my memory) described the Coelacanth as a “living fossil” and took that description literally. Evolution couldnʼt possibly be real, I was told, because here was this Coelacanth, utterly unchanged 65 million years (air quotes implied) after it was supposed to be extinct. If evolution were real, why would it ignore the Coelacanth? [or the shark, the horseshoe crab, etc.?]
Source

“Living Fossils” are the exceptions that prove the evolutionary rule. They stand out because the vast majority of species in the fossil record are NOT alive today. But as we will see such cases fit into a clear geological-evolutionary pattern.

Speaking of fish species, the most diverse and abundant species today are not the same as yesterday. The majority of fish species today are osteichthyes or bony fish, an extremely diverse and abundant group consisting of over 29,000 species—in fact they constitute the largest class of vertebrates (i.e., species with backbones) in existence today. But such was not the case in the past. There were times in the past when jawless fish filled the sea, then fish with armour, and then cartilaginous fish, in that order, before bony fish ruled the sea. There are only some cousins of the more ancient species alive today and in far less abundance than their ancestors were in the distant past.

The most numerous species of fossilized coelacanth show up in the expected place in the evolutionary geological record, and also have anatomical features, that place them in the fish-to-tetrapod evolutionary bush.

The coelacanth is a type of Sarcopterygian (sometimes considered synonymous with Crossopterygian fish), an “actinist Sarcopterygii” to be exact. They used to be far more abundant in the distant past than they are today. Another group of Sarcopterygii was the “rhipidistian Sarcopterygii” which were the shallow-water group, and they are extinct, unless you count all of the land-lubbing tetrapods that evolved from them. (Therefore the Sarcopterygii didnʼt all remain the same. Far from it.)

One point has to be emphasized; The living coelacanth is not a living fossil in the very strict sense that members of the species L. chaumnae itself have ever been found as a fossil. In fact, no other species assignable to the Genus Latimeria has been found as a fossil either. Latimeria and the Cretaceous fossil Genus Macropoma are quite closely related, and we could possibly include them in the same family. Beyond that, all fossil coelacanths belong to the order Coelacanthini. [Keith Littleton, New Orleans, LA]

Why No Coelacanth Fossils For 70 Million Years?

You might well ask: is it really possible for a group of species to live for millions of years and yet leave no fossils? First, note that fossil hunts are done on dry land. Thatʼs partly because itʼs easier, and partly because watery environments are usually undergoing deposition, which covers everything up. On land, rocks are eroding, and fossils get revealed. So, where do dry-land rocks come from? Well, some were formed on land, and some in fresh water, and some in shallow sea water. But very few were formed in deep sea water. Plate tectonics makes it clear why this should be. The deep ocean floor is constantly being destroyed, sucked down into the earth at subduction zones. It is unlikely for a piece of deep ocean floor to wind up as a dry-land rock. Now, imagine a creature that lives only in the open ocean, and is unlikely to venture close to shore. (Perhaps it lives in the depths.) That creature will leave no fossils that we are likely to find. So, the answer is, yes. It is possible to leave no fossils. Does Latimeria live in the depths? Well, close. Theyʼve been seen in caves about 200 meters down, and they die from decompression when brought to the surface. Also, if a creature lives in a small geographic area, it is possible that no one ever looked in the right place. The first colony of Latimeria is off one single island (Grand Comoro) in the Indian Ocean. And, the whole population there is only a few hundred fish. The second colony hasnʼt been located yet, so it canʼt be large. Source

Sharks also once had their “golden age.” The evolutionary record of their ancestors shows that the earliest shark-like species started out fairly small, and only grew larger over time, till the “golden age” of sharks, and then their diversity declined.
(Source) Some of the variety of ancient shark species:

Kasaoka City Horseshoe Crab (kabutogani) Museum (hakubutsukan) is the only horseshoe crab museum in the world. The museum opened March 16, 1990 with the purpose of protecting and promoting the breeding of this “living fossil.” This museum holds the worldʼs foremost collection of information on the evolution of this creature.

Evolution of the Horseshoe Crab

The trilobite is an arthropod that dates back to the Paleozoic Era, and preceded not only the horseshoe crab and the sea scorpion but all other arthropods, crustacea and insects in the fossil record. (So, not all trilobites stayed the same, they evolved. *smile*) For instance trilobites preceded sea scorpions that preceded both the the scorpion and the spider in the fossil record. So the horseshoe crabʼs closest living cousins include spiders and scorpions. (So as I said, not all trilobites stayed the same, some trilobites evolved. *smile*)

There are four distinct species of horseshoe crabs living on earth now. One lives on the beaches of the East Coast of the USA. Three others live in Japan and on the southeastern shore of the Asian continent.

Today there are only 3 genera and 5 species of Xiphosura (Horseshoe crabs and their extinct relatives) left alive, but they were much more numerous and diverse during the Palaeozoic era.

(Limulus) are ‘living fossils’, barely changed in some 250 million years (since early Triassic time)…The exoskeleton generally consists of three parts, the large, semicircular cephalothorax, or prosoma, the usually smaller, subtriangular and in earlier forms “trilobite”-like opisthosoma, and the long stout tail-spine or telson (which is actually the end part of the opisthosoma)…The compound eyes are small (and absent in some early forms), and there are six pairs of legs (in the living Limulus) but no antennae.

The late Cambrian (Caerfai epoch) marine family Eolimulidae is generally considered a true Xiphosuran,but again more research needs to be done if more is to be known about the early history of this interesting group.

Question #1: In the billions of generations through the millions of years that fruit flies have had to evolve, why have they not become or at least spawned something else?

Reply: About 500 species of fruit flies are found only on the Hawaiian islands, a chain of islands whose oldest rose up from the sea approximately 8 million years ago. Concerning the evolution of new fruit fly genera. . .

Reading a book on Drosophilia, I discovered the answer to the question of why no new genera of fruit flies have evolved in Hawaii despite the hundreds of species. It is due simply to the classification approach used by Drosophilia workers. The Hawaiian lineage is apparently descended from within the genus Drosophilia, as presently defined. Based on cladistic terminology, one genus should not give rise to another genus. Rather than reclassifying the 2000 or so “Drosophilia” into multiple genera, fruit fly workers use a variety of subgenera and informal terms to group them. In fact, genus names have been proposed for some of the Hawaiian lineages. [Dr. David Campbell, Biology Department, Saint Maryʼs College of Maryland]

And in answer to the question, “How to test that all Hawaiian fruit flies descended from one common ancestral population that began with a founder event,” the answer is to “Select many characters of Hawaiian and non-Hawaiian fruit flies, and use them to develop a phylogeny, using some related fly as an outgroup.” (Source) Such characters include the fact that Hawaiian fruit flies are larger and more brightly colored compared with the rest of the fruit flies on earth, and have even evolved a type of “song” that the mainland fruit flies never evolved. Obviously, some new morphologies and behaviors peculiar to certain species of fruit flies have evolved on the Hawaiian islands.

About 25% of all fruit fly species worldwide are found on those tiny Hawaiian islands. Ecologists believe Hawaii has so many kinds of fruit flies because the islands were isolated for millions of years and the environment varies greatly from beaches to tall mountains and lush green tropical valleys. When the first fruit flies arrived, they were able to evolve quickly because there were few competing species of flies. When people first arrived at the islands centuries ago they also found that there were thousands of unique species of birds, plants, and other life forms. While it is the fruit flies that are the best known, many other insect groups have diversified also. Hawaii boasts a carnivorous caterpillar, the happy face spider and a whole host of other fascinating endemic arthropods, many of which are brilliantly illustrated in the book, Hawaiian Insects and Their Kin by Francis Howarth and William Mull. Lush, and also in the book, Remains of a Rainbow; Rare Plants and Animals of Hawaiʼi by David Liittschwager and Susan Middleton. Published by National Geographic. See also Hawaiian Natural History, Ecology, and Evolution by Alan Ziegler. Published by University of Hawaii Press which traces the natural history of the Hawaiian Archipelago, such as island formation in a chain due to plate tectonics slowly moving over a lava spewing point in the ocean far below, as well as plant and animal evolution, flightless birds and their fossil sites.

Sadly, people have over time brought many new species with them to the islands, and the competition is driving most of the native species into extinction. Even the unique Hawaiian fruit flies are disappearing, replaced by flies from other parts of the world.

Question #2: Consider dogs. We have St. Bernards, Chihuahuas, Great Danes, poodles, and hundreds of other breeds of dogs. But not only are those animals all mammals, they are all dogs.

Reply: Then what were the “dog-bears” of the Miocene? Dogs or bears?

For further reading see this article by ex-creationist/geologist, Glenn Morton, Living Fossils: There Are None