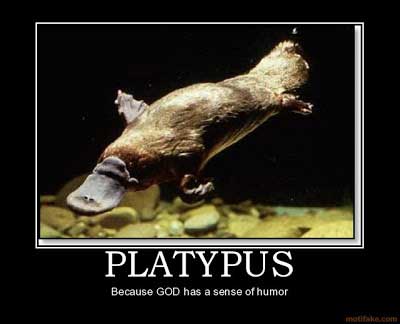 The platypus “almost single-handedly (or, perhaps better, single-web-footedly) overturned the earlier creationist classification of animals that followed a Great-Chain-of-Being model. With its hodgepodge of physical traits and behaviors it offered ‘an unexpected bridge between the categories of mammal/quadruped and reptiles and birds.’ That bridge helped set evolutionary theory on a new course. See Moyalʼs, Platypus: The Extraordinary Story of How a Curious Creature Baffled the World. The platypus played an explicit role in Charles Darwinʼs ideas on isolation, species diversity, and natural selection, and he branded it a prime example of a ‘living fossil’ that had managed to find an unoccupied ecological niche and live, relatively undisturbed, while fellow creatures marched toward extinction.

The monotremes, the group to which the Platypus belongs, are among the earliest forms of mammals. When the first monotreme, a platypus, was sent back to England scientists did not believe it was real, they thought it was an elaborate hoax. After all how could a mammal have a duckʼs bill, webbed feet, spurs on its hind legs and lay eggs? These mammals retain many reptilian characteristics in that they lay eggs, have a single genital opening, the cloaca. Even their limbs are attached to their body more like those of a reptile than a mammal. Also the male platypus is the only known venomous mammal, another reptilian trait.

Of the known living monotremes, two species, the platypus and echidna, lives in Australia while another echidna species lives in New Guinea. So they are all found in Australasia. The reason these species have survived is that when they were isolated on the Australian continent with the marsupials they adapted to very specific habitats allowing them to compete successfully with the marsupials. This specific adaptation has made them vulnerable to changes in their habitat and for this reason attention needs to be given to preserving their habitats to prevent extinction.

Until human beings brought modern day mammals to Australia it didnʼt have any true mammals, it just had marsupials and less than a handful of monotreme species that included the Platypus.

The Difference Between Monotremes, Mammals and Marsupials (Monotremes are the earliest of the three)

Sharing a common ancestry, marsupials and mammals evolved for millions of years in two increasingly different directions having a lot to do with changes in their reproduction systems. Marsupial species lack a womb with a placenta where the young live prior to birth, nor do they have mammary glands, instead the young are born early on and then have to climb into a pouch where they lick sweat off of hairs inside the pouch in which they continue to grow, eventually emerging from the pouch. Both marsupials and mammals feed their young via modified sweat glands. But mammals evolved in the direction of keeping their young in a watery womb with a placenta until birth, and after birth feeding them rich quantities of milk via mammary glands. But even earlier than marsupials and mammals in the fossil record are monotremes (such as the platypus which still laid eggs like a reptile).

Modern mammals (with placentas and mammary glands) spread and diversified all over the world, nudging out marsupials nearly everywhere, except in Australia, because Australia broke off from the Asian continent long before mammals evolved. Australia was the first landmass to be isolated from the supercontinent Pangaea. So Australia became an entire continent cut off from the evolutionary development of mammals. Thatʼs why Australia came to be filled with nothing but marsupials along with the only three known monotreme species (some of the most primitive of mammals, before they evolved placentas) which includes the platypus.

Far fewer species of marsupial were able to survive in the mammal-dominated world of the other continents. For instance the marsupial known as the opossum inhabits the United States and another 80 or so species thrive in South America, but some 220 species are found only in the Australasian region.

The Young-Earth Creationistsʼ Long March of the Marsupials (and Monotremes)

Creationists at “Answers in Genesis” believe a hoard of marsupials and some monotremes disembarked from Noahʼs ark in Turkey and then promptly began a long march to Australia, the only continent where such a hoard of marsupial species are found today.

The marsupial population of Australia contains animals found nowhere else on earth—not even in fossil form. Are we to suppose that those marsupials managed to travel from the landing place of Noahʼs ark to… Australia? What a long perilous post-Flood journey. I guess God guided them. But you donʼt hear about that miracle in the Bible. Why not? Itʼs at least as good as the story about God herding the Israelites through the desert, only these marsupials were herded through a denuded post-Flood earth undergoing cataclysmic aftershocks. This menagerie of wombats and koalas, bandicoots and kangaroos (not to mention the flightless moa and kiwi birds of New Zealand) had to keep ahead of lions-ʼn-tigers-ʼn-bears all the way to Indonesia, and then—although the superior placental mammals could not manage it—reach the continent of Australia. As if this were not mind-boggling enough, it turns out that the types of marsupials that made it to Australia just happened to form an ensemble able to fill all the ecological niches available!

Thus, there were marsupial moles, marsupial ant-eaters, marsupial mice, marsupial grazers, marsupial carnivores, marsupial frugivores, etc.—not one of which can be found anywhere else in the world. If this highly diversified marsupial population evolved from one or a few primitive generalized marsupials that reached Australia millions of years before it separated from Indonesia (and before mammals had evolved on the mainland), then this peculiar situation is understandable. But if all these creatures had to journey from Turkey to Australia as an ensemble, it is incredible beyond computation. [Frank Zindler, “The Kiwi Question,” American Atheist, May 1988]

Molecular biology and anatomy both demonstrate that, of living marsupial groups, koalas are most closely related to wombats. And both the living species and fossilized remains of koalas and wombats are found only in Australia. In other words they evolved there from shared marsupial ancestors that had been living on that continent even before the land bridge that connected Australia with Antarctica had dissolved. Click here for a Video illustrating The Evolution Of Mammals And Their Dispersal as the continents shifted their positions over geologic time.

Such fragile creatures as the platypus and the blind marsupial mole raced across the land bridge to Australia quicker than the Malaysian tigers and other robust placentals? [Robert A. Moore, The Impossible Voyage of Noahʼs Ark]

Darwin was proven right concerning his suspicion that the platypus was a “living fossil.” Fossil evidence of a platypus-like jaw was discovered in Australia that dates back earlier than the fossils of any other known marsupial or modern mammalian fossil. And fossil evidence of a cousin of the platypus has even been found thatʼs dated earlier still, before Australia broke off from Antarctica.