The World Beyond Your Head, quotations from Matthew B. Crawford 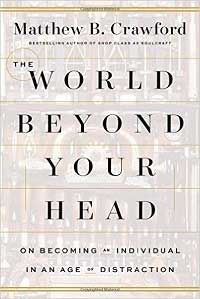 “In a culture saturated with technologies for appropriating our attention, our interior mental lives are laid bare as a resource to be harvested by others.”

“The advent of hyperpalatable mental stimuli… raises the question of whether the ascetic spirit required for education has a chance. The content of our education forms us, through the application of cultivated powers of concentration to studies that arenʼt immediately gratifying. We therefore had to wonder whether the diversity of human possibilities was being collapsed into a mental monoculture — one that can more easily be harvested by mechanized means.”

“…we need other people to achieve individuality. For others to play this role for me, they have to be available to me in an unmediated way, not via a representation that is tailored to my psychic comfort…”

“When [our shared spaces] are saturated with mass media, our attention is appropriated in such a way that the Public—an abstraction—comes to stand in for concrete others, and it becomes harder for us to show up for one another as individuals.”
— Matthew B. Crawford, The World Beyond Your Head: On Becoming an Individual in an Age of Distraction

In one of the most entertaining and illuminating chapters in the book, Crawford critically interprets the Disney Channelʼs popular childrenʼs program “Mickey Mouse Clubhouse.” In earlier iterations of the show, back in the middle decades of the 20th century, the show entertained kids with slapstick and acrobatics in which beloved Disney characters (Mickey Mouse, Goofy, Donald Duck) interacted (sometimes a little violently) with a recalcitrant physical world.

In our time the show has been radically re-imagined. Computer animation now places the characters in a virtual world in which any conceivable problem they confront is easily solved by a computer (the Handy Dandy machine) that is instantly summoned at any time and place. “Oh, Tootles!” Mickey and his friends exclaim, and up pops a screen, providing ready-made solutions perfectly tailored to any random obstacle or frustration that temporarily stands in the way of achieving their goal in a given episode.

In Crawfordʼs telling, this is our world — or at least the world our culture is scrambling to create. Itʼs one in which there will supposedly be “no conflict between self and world” and “no contingency that hasnʼt been anticipated by the Handy Dandy machine” in our home, in our workplace, in our car, in our pocket or purse.

“The satisfactions of manifesting oneself concretely in the world through manual competence have been known to make a man quiet and easy. They seem to relieve him of the felt need to offer chattering interpretations of himself to vindicate his worth. He can simply point: the building stands, the car now runs, the lights are on. Boasting is what a boy does, because he has no real effect in the world. But the tradesman must reckon with the infallible judgment of reality, where oneʼs failures or shortcomings cannot be interpreted away. His well-founded pride is far from the gratuitous “self-esteem” that educators would impart to students, as though by magic.”
— Matthew B. Crawford, Shop Class as Soulcraft: An Inquiry Into the Value of Work

“Weʼre not as free and independent as we thought. Street-level work that disrupts the infrastructure (the sewer system below or the electrical grid above) brings our shared dependence into view. People may inhabit very different worlds even in the same city, according to their wealth or poverty. Yet we all live in the same physical reality, ultimately, and owe a common debt to the world.”
— Matthew B. Crawford, Shop Class as Soulcraft: An Inquiry Into the Value of Work

“Once upon a time, our problem was guilt: the feeling that you have made a mistake, with reference to something forbidden. This was felt as a stain on oneʼs character. Ehrenberg suggests the dichotomy of the forbidden and the allowed has been replaced with an axis of the possible and the impossible. The question that hovers over your character is no longer that of how good you are, but of how capable you are, where capacity is measured in something like kilowatt hours—the raw capacity to make things happen. With this shift comes a new pathology. The affliction of guilt has given way to weariness—weariness with the vague and unending project of having to become oneʼs fullest self. We call this depression.”
— Matthew B. Crawford