The apostle Paul — in both his speeches and writings—made extensive use of the late apocryphal work known as The Wisdom of Solomon — not to be confused with the Book of Proverbs, but instead, a late non-canonical apocryphal work attributed to “Solomon”: 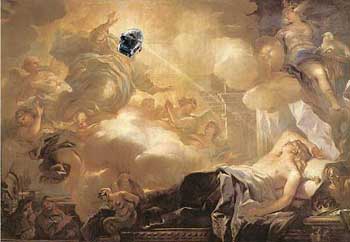 1 Corinthians 2:9 (compare the non-canonical Ascension of Isaiah 11:34; also note that the early church father Origin said this verse in 1 Cor. was from the non-canonical, Apocalypse of Elijah — Origen, Commentary on Matthew 27.9. Originʼs idea was bitterly disputed by Jerome (Letter 57 [to Pammachius] §9 [NPNF, 2nd series, vol. 6, p. 117]), who claimed the verse was taken from Isaiah 64:3-4 “according to the Hebrew text.” In fact, however, the Hebrew is only a very rough approximation of Paulʼs language in 1 Corinthians 2:9, so Jerome may well have been wrong on this point. So, compare the Ascension of Isaiah 11:34 as originally noted.)

Ephesians 5:14 (Apocalypse of Elijah — So identified by Epiphanius, Against Heresies 1.3.42; see also Jerome, Commentary on Ephesians 3.5.15.)

James King West writes: “Among the characteristics of Wisdom as depicted in The Wisdom of Solomon, two are of particular interest. First, the afterlife is described in terms of the Hellenistic dualism which debases matter in contrast to the immortality of the soul, rather than the Judaic concept of the resurrection of the body (cf. the remarkably beautiful passage in 3:1-9, also such vss. as 8:13). Second, the personification of wisdom, introduced, for example, in Proverbs 1-9, is here carried much farther than in any parallel Judaic literature. In the book of Proverbs the personification of wisdom is symbolic, but in this book wisdom is described in terms intended to be taken quite seriously as:

These descriptions of wisdom, especially the crucial passage in 7:22-8:21, reflect the increasing emphasis on the transcendence of God characteristic of later Judaism, combined with an unmistakable influence from Hellenism. How far the author intended his definition of Wisdom as an intermediary between God and the world is impossible to say. Viewing his words from the perspective of Greek thought, it would probably be easy to read too much into them. Whether consciously or not, he nevertheless spoke a language that during the next two centuries and later was to play a profound role in religious development.” (Introduction to the Old Testament, pp. 464-465)

As I have noted in another post, the Pauline idea about a “spiritual body” and living in “heaven” rather than on a recreated earth is the earliest formulation of the “resurrection” according to the earliest documents we possess, and certainly seems to agree with what is found in The Wisdom of Solomon. Even Paulʼs Christology seems to owe something to the way Wisdom has grown more like a person than a metaphor according to The Wisdom of Solomon.

Not only Paul but other authors of the New Testament employed — and even appealed to the authority of — non-canonical ideas, oral traditions, deuterocanonical, extracanonical writings, and varying textual recensions (like the Greek Septuagint Bible where it said something different from the Hebrew Bible):

Also, the structure of the Beatitudes in Matthew 5 most likely was familiar to many Jews in the first century BCE, since they were already evidence in the Dead Sea Scrolls before Jesusʼ day:

Of course thereʼs also the book of Enoch, mentioned by Jude and passages of which are cited by the author of Revelation. In fact recently scholars are acknowledging that the “Son of Man” figure mentioned in Enoch probably influenced early Gospel authors: “Parables of Enoch: A Paradigm Shift” And the Dead Sea Scrolls even mention a fascinating “Melchizadek” figure who is to “judge the holy ones of God, executing judgement.”


The above is just one aspect of NT writings being derivative of their day and age. But larger more general aspects of Hellenistic and Jewish cultures and their ideas about deity also lie behind ideas and stories in the NT. At any rate, sticking with the way NT authors cite such inter-testamental non-canonical works, I always get a chuckle at how one NT writer, the author of the letter of Jude, says “Enoch the seventh from Adam… spoke a prophecy…” then cites some lines from the book of Enoch and applies them to his own day about how thousands of angels would come from heaven and the whole earth would be judged, including the deceivers inside the first century church whom the NT author was so worried about.

I also get a chuckle out of Paul citing an inter-testamental and non-canonical tale about a rock that rolled around on its own, following the Israelites around in the desert for decades, a rock that also have a stream of water flowing from it as needed, providing water for them as they remained on the move each day for forty years. And that rolling rock was Christ, Paul says.

Reminds me of how one famous British guy (a former prime minister of Britain during the Victorian era who was also a classics scholar) wrote a thick whole book claiming that Homerʼs works were inspired by God and pointed to Christianity being true. And in the days of the early church the Syballine Oracles and Virgilʼs poetry were cited as inspired in some sense and were interpreted as pointing to the truth of Christianity. I guess when you have the hammer of dogma in your hand everything looks like a nail.