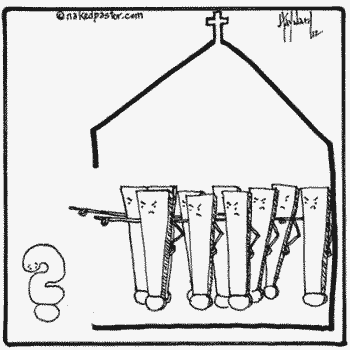 Christians are tireless debunkers of each othersʼ interpretations of the Bible (perhaps because many of them still believe the stakes are infinitely high, and they fear one unorthodox interpretation can lead to another down a slippery slope toward damnation. But see this rival interpretation of the so-called “slippery slope” argument according to more moderate Christian scholars.

Without enumerating each controversy between Christians let me point out a series of books by different Christian publishers that feature points and counterpoints, usually by conservative Christian theologians, who canʼt agree on how to understand points and practices related to Scripture, from Genesis to Revelation, and even disagree on what type of “authority” the Bible constitutes (click here for a sampling of such books).

Thanks to the internet, questions of biblical interpretation flow without ceasing. Aged scholars, eager young seminarians, and born again newbies are commenting on blogs, engaging in online forums and Facebook discussions, commenting on books at amazon.com, tweeting, contributing to carnivals like the “Biblical Studies Carnival” (google it by name, since it appears at different blogs run by biblical scholars each month), and older but prestigious newsgroups like XTalk: Historical Jesus & Christian Origins.

There are biblical scholars of all stripes who run their own “biblioblogs” (Biblical Studies Blogs), along with a list of the top 50 such blogs.

Books and articles on biblical studies have never been easier to seek and obtain (at the very least one can read abstracts and portions of books online and request the item at your local library via document delivery).

For those who enjoy listening to free NT scholarship in mp3 format there are some podcasts I suggest. The questions raised by the following scholars are well worth pondering. (Iʼve heard them all, great stuff)

Later Gospel stories appear to depend on earlier ones, starting with Mark (with new urban myths/tall tales arising about Jesus and added to each freshly written Gospel after such tales reached those authors in the Greek speaking world). Some of the most obvious Gospel trajectories (developments in the story from Mark, Matthew, Luke and finally John) are noted in this brief article: http://www.umass.edu/wsp/journal/v1/wsp1-32%20trajectories.pdf The point is that many Evangelicals, including Evangelical apologists now accept Markan priority, but that priority can be extended by trajectory arguments, which establish a sequence of story development in the completed versions of each Gospel. There is even a Judas Trajectory, https://www.umass.edu/wsp/journal/v1/wsp1-33%20judas.pdf

Which Jesus: Examining Differences in the Gospel Narratives

(The least respectful to Christianity of all the above podcasts, no verbal holds barred—but the podcasters take into account some of the same mainstream scholarly material covered by the scholars above. Not your average atheist criticism of the Gospels, but neither as detailed as the scholarship and sources mentioned above)

Introduced the 19th century public to a host of questions that biblical scholars were pondering. He included in his work responses to various apologetic arguments made at that time (which mirror to some degree replies made by some apologists today).

I made use of some of Straussʼ points when I composed this piece on the question, Did the Historical Jesus Speak About the Necessity of Being “Born Again?”. Questions raised by Bart Ehrman and David Friedrich Strauss.

Examples of Later Additions to Scripture, Including Pauline Interpolations

There are some things even an Evangelical apologist canʼt help but notice and hence needs to try and explain away, like the endings that later Christians added to Mark (of which there are more than one, and even those appear in variant forms in different early texts).

Speaking of adding to Scripture, there is also evidence that Paulʼs letters feature interpolated material (1 Corinthians 14:34-35 and 1 Thessalonians 2:14-16). See this fascinating discussion and link to a slide show. These are basic questions raised by Pauline scholars, and arranged well by Richard Carrier. Worth pondering, along with William O. Walkerʼs arguments concerning additional interpolations in Paulʼs letters.

Furthermore, the Gospels, Matthew and Luke, Differ Most From Each Other in exactly those places where the ostensibly earliest Gospel, Mark, was silent, i.e., in their tales of Jesusʼ infancy and post-resurrection appearances (where Mark was silent, so neither Matthew nor Luke could maintain their closeness to one another by following Mark in those areas, hence they diverge the most from each other in exactly in those places).

Richard Carrier, VIDEO, Why the Gospels Are Myth: The Evidence of Genre and Content