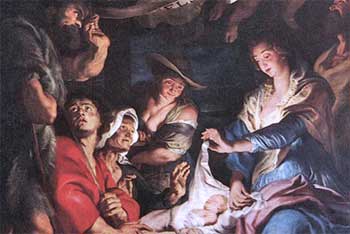 Hi Jason, I read your review of Jonathan Pearceʼs book on The Infancy Narratives in the Gospels of Matthew and Luke. That is a fine response from the inerrantist or near inerrantist perspective. But not a lot of historians are inerrantists when it comes to the stories found in ancient documents, especially documents composed by members of a religion seeking converts.

And none of your responses are necessarily inerrant, nor could one prove they were divinely inspired. So just because you have come up with some responses to questions that the text itself makes people ask, because they are pretty apparent and will remain always in those texts (click here for examples) does not mean the debate ends there.

There are several ways to view the infancy stories (stories that only appear in two out of four NT gospels, not in Paul, nor in the ostensibly earliest Gospel, Mark). Among the different ways to view the stories there are…

Jesus as Moses and More

Jesus as Israel: The Typological Structure of Matthewʼs Gospel by Peter J. Leithart

Matthew, in contrast to the other synoptics, gathers Jesusʼ teaching into large “blocks” of teaching… That this was a deliberate device [employed by the author of the Gospel of Matthew] is evident from the repetition of the concluding (or “transitional”) formula (7:28-29; 11:1; 13:53; 19:1; 26:1-2). Repetition as a structuring device is common in the Old Testament,15 and given Matthewʼs evident immersion in the Hebrew Scriptures it is entirely plausible that he would have borrowed this literary device, just as he cites Old Testament texts as prophetic types of Jesus. That Matthew employed this formula five times to mark off five sections of teaching also provides evidence that Matthew intended the structure of his gospel to underscore his theme that Jesus is the fulfillment of Torah (and of all the Scriptures).16 The value of Baconʼs five-discourse structure is most evident when integrated with Matthewʼs typological hermeneutic, as examined in Dale Allisonʼs richly detailed, deeply researched, and theoretically sophisticated study, The New Moses. Allisonʼs book is not only stimulating, but utterly compelling. Typology is clearly central to Matthewʼs presentation of Jesus…

Allison finds allusions to various passages in Deuteronomy in the closing section of the Sermon on the Mount,21 suggests that the “transitional formula” first used in 7:28-29 echoes Deut 31:1, 24; 32:45,22 and notes verbal and conceptual links between Matt 9:35-38 and Num 27:15-17 (“sheep without a shepherd”) that point to connections between Jesusʼ commissioning of the twelve and Mosesʼ commissioning of Joshua (Matt 10:1-3 with Num 27:18).23 Matthew 10:1-3 in fact conflates Num 27:18 with Num 13:1. From the latter it borrows “sending” (αποστελον in both the LXX and Matthew), while from the former it borrows conferral of authority (LXX: δοξα; Matthew: εξουσια). The twelve disciples-made-apostles are “spies” who see that the land can be conquered despite Satanʼs presence and mastery; they are also “Joshuas” in their authority and faithfulness.

These hints suggest the possibility that the “Pentateuchal” section of Matthewʼs gospel concludes somewhere near chapter 10, and from that point we move from a Moses/Exodus typology into a Joshua/conquest typology. Given the fact that Joshua is himself typologically compared to Moses,24 it is not surprising that traces of Mosaic typology continue into chapter 10, but these traces become faint because Matthew has brought another typology to the forefront and allowed the Mosaic typology to recede to the background.25 As Matthewʼs story moves on, he makes similar transitions at various points, moving sequentially through the history of Israel with the five discourses, and the surrounding narrative, marking out major periods of Israelʼs history.26 This suggestion may not mark an epochal advance in Matthean studies, but it accounts more fully for the structure of Matthew than any alternative proposals yet made.27

The early chapters of Matthew provide prima facie evidence of the plausibility of this scheme. First, the sequence of events in Matthew 1-7 closely mimics the sequence of the Pentateuch. Matthew begins his gospel with an overt quotation from the LXX of Genesis: He is writing the βιβλοσ γενεσεωσ of Jesus, just as Genesis records the βιβλοσ γενεσεωσ of heaven and earth (Gen 2:4) and of Adam (5:1). Matthew follows with a genealogy, like the numerous genealogies of Genesis (4:16-26; 5:1-32; 10:1-32; 11:10-32; 36:1-43),28 recounts a miraculous birth (cf. Isaac, Jacob) to a dreamer named Joseph.29 Israel has become an Egypt, her king the child-slaying Herod, and Jesus has to escape “by night” (cf. Exod 12:30) to safety, an event that Matthew sees as a fulfillment of a passage from Hosea that speaks of the exodus (Matt 2:15; Hos. 11:1). After his watercrossing in baptism (3:13-17), He is tempted in the wilderness for forty days, where He quotes from passages referring to Israelʼs forty-year sojourn (4:1-11). Ascending a mountain, He instructs His disciples in the righteousness that surpasses that of the scribes and Pharisees (Matt 5-7), laying before Israel the choice between life and prosperity, death and disaster, a choice between maintaining their “house” and seeing it dismantled by a rising “river” (cf. Isa 8).30

Schematically, the opening chapters of Matthew follow the first two Books of Moses as follows:

Much of this is old hat, and so self-evident that even scholars who resist typological interpretation have a hard time ignoring it. What is often missed, however, is what this implies about the logic of Matthewʼs typology. Though there are certainly “Mosaic” dimensions to the typology throughout these chapters, the typological thread that provides the continuity is overwhelmingly Jesus-as-Israel.31 Matthew 1:1-17 does not mention Moses, and its allusions to Genesis draw on the pre-Mosaic history of the people. Jesus is “son of Abraham” (1:1), who is the father of Israel (Rom. 4:1) and not the father of Moses. Though Allison is probably right to discern some hints of Mosaic typology in Matthewʼs birth narrative, the emphasis on Josephʼs role keeps the later chapters of Genesis firmly in mind. Mosaic typology becomes stronger in chapter 2, but even here Jesus is as much Israel as Moses — He does not lead a people out of Egypt-Israel, but is an infant taken, like the surviving firstborn sons of Israel, out of the land.32 All Israel is baptized in the sea (cf. 1 Cor. 10:1-4), and all Israel is tempted in the wilderness. When He teaches from the mountain, He is surely a Mosaic figure, but He is also much more, for He does not deliver words from Yahweh but speaks with an apparently underived authority (7:29).

Not only does Matthew repeatedly treat Jesus as the embodiment of the nation, but the sequence of Matthewʼs narrative is following the order of Old Testament history quite exactly. A few pericopes, to be sure, have are more loosely connected to this typological sequence (e.g., Johnʼs ministry, 3:1-13), but all the sections that are evidently typological are arranged in the same order they are found in the Old Testament. Matthew 1-7 is the most obviously typological section of his gospel, and if in this section Matthew follows a Jesus-as-Israel typology that is, in its general outlines, chronologically arranged, it is plausible that he would continue that typology straight through.

Bishop Spong discusses how Matthew divided his work into 5 books “in a deliberate attempt to model the form of the 5 books of the Jewish Torah,” thus employing “the rabbinical device of numbers in his teaching,” which is seen elsewhere in Matthew as well:

Spong adds that zeal appears to have overwhelmed the rationality of the author of the Gospel of Matthew:

[I]n Matthewʼs eagerness to fashion his story to his Jewish audience, he violated the meaning of his Hebrew text time after time. The enigmatic text in Isa. 11:1, for instance, that referred to a branch out of Jesse could hardly be used to undergird the fact that Jesus went to live in Nazareth, yet that appears to be the way Matthew used it… The details of the crucifixion and burial were not predicted by Psalm 22 so much as they were deliberately shaped by that psalm. The servant passage of Isaiah, the son of man passages of Ezekiel and Daniel, the triumphant passage from Zechariah, the shepherd and Bethlehem passage from Micah all became vital and valuable tools for understanding and interpreting Jesus in the Jewish context. In each instance Matthew altered the original meanings of these texts to suit his own needs. His zeal overwhelmed his rationality. (p. 164)

A greater than Moses …

If Jews believed Moses had been the greatest religious leader in history, then Jesus must be portrayed as one greater than Moses. This was the guide to the narrating of the Sermon on the Mount.

If Jews believed Solomon had been the wisest man in history, then Jesusʼ wisdom needed to be greater than Solomonʼs. (Matt. 12:42)

If the Temple was believed to have been the place where God made his divine presence known to mankind, then Jesus had to be portrayed in terms of the Temple. One greater than the Temple had come. (Matt. 12:6)

If Jonah stood in Jewish folklore as one who had died and come to life again through the innards of a fish, then the story of Jesus who entered death and conquered it must be told in terms of Jonah. One greater than Jonah had come. (Matt. 12:41)

Thus concludes some of the evidence that the Gospel of Matthew might be the product of greater creativity than conservative Evangelicals are wont to admit.